MAKING A CHANGE- Pay Attention to the Signs 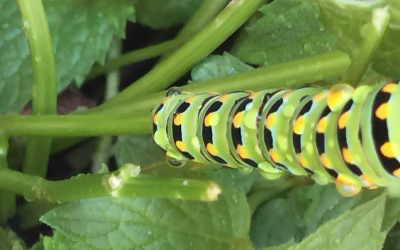 So last time I wrote about taking a step to make change. That’s exactly what I have been doing. I’m done with all that isn’t working, making myself the priority and making the necessary changes along the way.

So ironically, (okay I really don’t believe in coincidences), I’ve noticed several swallowtail caterpillars in my garden. Caterpillars are really cool because they represent the stage before transformation, the ground work prior to the change. I take that as a sign from the universe that I am truly preparing myself for the change and it’s just a matter of time before that happens. I need to feed myself with all that which will prepare me for that transformation.

Everything that happens to us, around us, is a message from the Universe.  Just the other day, as I drove down the street, a bird flew into my vehicle.  Luckily, it flew off but I had to ask myself what the message was.  The bird was trying to slow me down! And so I did ease up on the gas.  Seconds later as I went down the hill, I had seen that a cop had pulled over a car on the other side of the road and there was another cop car checking speeds with radar. Still going the speed limit, as I turned the corner, there was yet another cop with a radar gun this time pointed at the traffic on my side of the street.

So how often do you listen to the messages that the universe brings you?

Here’s another good example.  One day I was buying a product at the store. As I approached the cashier, my money fell onto the floor.  I realized that the Universe was telling me that I was throwing away my money! I chose not to purchase the item as it wasn’t a necessity. My money was far more important than the item I was about to purchase.

Pay attention to the circumstances around you.  Notice what messages the Universe is giving you. Let them guide you so you waste time or money going down the wrong path!